We are coordinating a local Knoxville hosting program of Ukrainian orphans from the Kharkov region. We will be posting more details over the next few days but if you may be interested in hosting this Christmas please post a comment with your contact info.

Posted by Steve Eimers at 8:20 PM 6 comments: Links to this post

A follow up to the How-We-Do-It posts from a while back... 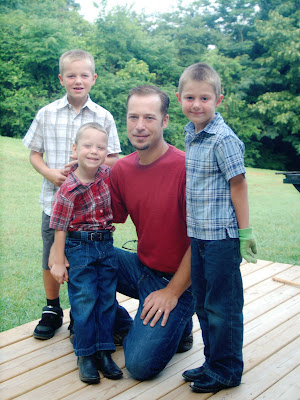 (I don't remember posting this picture when I took it.
If I did, then you can enjoy this unrelated to the post content photo
of the boys and their daddy again.)

At our family reunion the other day, some of us girls were talking. I don't remember how it came up but I found myself saying that in some ways six kids is easier for me than three. (I think we were talking about the Duggars) That sounds unbelievable and, surely is a matter of my own perspective so let me explain:

Before the six, there were three. Three girls who would happily sit and play Barbies, My Little Ponies, or read books and color. It was quieter. The mess wasn't a lot different, however.

Some things are different. The noise level. Boys, it turns out, make a lot of noise. Dents in the walls appeared thanks to flying space men, or cars, or even Barbies-- but always flying out of the hands of boys. ha, ha!

The noise is one of those things that becomes normal to me after a time. I don't allow excessive amounts inside (that's what the great outdoors are for) but I try to keep it real. There will be noise. There will be dents. There will be mess. Spackle is my friend.

Now, what to do about it? That is my job: I am a manager. The managing is different for me than being managed by the mess, which is what I was before. This is not to say my house is not messy, just that I had to implement a system which would work for us and keep our "situation" under control.

I often see things and tidy them up. But there are times that we just don't worry about it. Instead of the work never being done, we have clear cut lists for each child per day and everyone understands that we are a team. There is a sense of accomplishment when a daily list has been completed and there is benefit to working quickly. (Unlike a we-all-work-till-it's-done system)
I also have the peace of mind that, once a day, for a few minutes, the house will all be tidy (sans bedrooms).

This clean-up and maintenance time is my down time. It happens right after breakfast and before school so that I can come down to the computer with my coffee and relax after the morning "rush". The kids understand this and I made sure early on that they understood that I have my jobs and they have theirs but that mine happen at different times of the day. No one wants my job and that is fine with me! :-)

This is getting long so perhaps I will elaborate in a Part 2. But just wanted to say that I am, by nature, a messy, disorganized sort. Haha! Six kids has, remarkably, forced me into being a better, more organized me. (Notice that I did not label myself simply as "Organized"!) And, for the most part, a happier me. We all--one child or two children or, in my case six children--we all go to bed wiped out sometimes. Wiped out is wiped out; it doesn't really matter too much how many kids did the wiping! But I get to enjoy six times the hugs, six times the laughs, six times the funny things that come out of their mouths! It is a good life. And worth it all.

Questions? Comments?
Posted by Steve Eimers at 6:37 AM 5 comments: Links to this post

Labels: how we do it
Newer Posts Older Posts Home
Subscribe to: Posts (Atom)